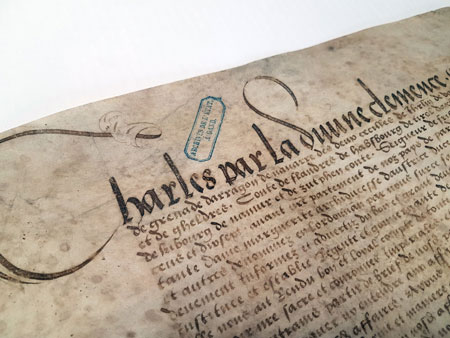 Not only the dukes of Burgundy, but also many municipal corporations and church institutions in the (Southern) Netherlands have bequeathed very rich archives from the Middle Ages. Cartularies, charter collections and account books are the most prominent items from this period.

Charter collections hold the charters that a sovereign, a local ruler, a city or an abbey has received in the course of the centuries. Cartularies or charter registers serve as backup copies of the most important charters and are therefore also of key importance. As from the Middle Ages, ever more account books were created in which cities and bailiffs recorded and rendered account of their annual receipts and expenditures. For medievalists and sigillographers, the fully digitised collection of seal moulds may also be a very precious source for research.

Charter collections contain the charters that a sovereign, a local ruler, a city or an abbey has received in the course of the centuries. The oldest documents preserved in Flanders and Wallonia date back to the ninth century. Thanks among others to the support of the King Baudouin Foundation and the Fonds Baillet Latour a number of voluminous charter collections were not only restored but also digitised in the past years.

Charters of the Counts of Namur

The charter collection of the Counts of Namur contains a total of 1,365 – mostly sealed –  charters from the period 1092-1615. Most of the documents bear on the administration of the county, but there are also charters related to other regions such as Liège, Brabant, Flanders, Hainaut and Luxembourg. The counts forged alliances with other principalities and established ties through marriage with other regions in the Low Countries, but also with Scotland and Sweden.

Charters of the Counts of Flanders

The charter collection of the Counts of Flanders (1086-1559) not only holds charters received by the counts but also hearings of witnesses, accounts of the comital ‘hotel’, and other documents providing a great wealth of information about the political, economic and cultural history of Flanders, and about the international ties to various German, English and Scandinavian principalities. Since the sixteenth century, this collection has had a turbulent history. Those charters that survived wars and natural disasters were brought together in three collections (Gaillard, Saint-Genois and Austrian Fonds) in the nineteenth century.

Charters of the Abbey of Stavelot-Malmedy

The Benedictine abbey of Stavelot-Malmedy was founded in 651 and is one of the oldest monasteries of the country; it became the seat of the homonymous independent church principality in 962 and existed until the end of the Ancien Regime. The charter collection of this double monastery holds 762 items, including the oldest archival record preserved in Wallonia: a deed of donation by Lothair II dated 862 in favour of the abbey of Stavelot.

The importance of Liège as ecclesiastical centre is evidenced by not less than seven collegiate churches. Most of them have left behind precious charter collections. Among them, the chartarium of Saint Lambert’s Cathedral (demolished in 1795) is particularly outstanding due to its old age and volume.

The chapter of Saint Pharaildis (Dutch: Veerle) in Ghent, established in the old chapel of Gravensteen castle, has left behind a vast charter collection containing deeds of very diverse nature. Most documents are about the administration of the patrimony of the chapter and related institutions.

Cartularies or charter registers serve as backup copies of the most important charters and are therefore of key importance. Due to the physical vulnerability of major privileges and title deeds, many archive creators have had copies made of key documents from their charter collection, often in the form of richly illustrated charter books. When charters are lost, these copies form an interesting basis for research.

In a number of State Archives repositories, the cartularies were brought together in separate collections. In most repositories, they are still part of the original holdings set up by the archive creators however.

Accounts of municipal corporations and bailiffs

In the late Middle Ages, the creation of accounts for the purpose of annually rendering account of receipts and expenditures became a common practice. Many cities and judicial officials  indeed had to give account to the audit court (Chambre des Comptes) of the sovereign. This is the origin of the more than four kilometres of archives from the audit court kept at the National Archives. The accounts of cities and bailiffs form the backbone of these archival holdings and allow for a panoply of research.

As from the fifteenth century, many municipalities (mostly Flemish) were obliged to submit their accounts to the central audit court. This resulted in the creation of very interesting and homogeneous series of records that are a wealth of information on the economic and cultural life in these cities. The accounts are also of interest for disciplines such as historical linguistics or military and environmental history. The annual recurrence of many receipts and expenditures (for municipal utilities, attendance fees, marksmen's fairs, processions, etc.) enables long-term studies.

Accounts of officers of the law

A number of local bailiffs, reeves, sheriffs and stewards submitted their accounts to the Audit Court. These are especially precious series of sources for the history of crime. The accounts of the bailiffs of Leuven, Bruges and Deinze are already available in digital format.

The State Archives of Belgium holds the second largest collection of seal moulds in the world. The first of the ca. 38,000 moulds date from 1864. These moulds were produced from seals conserved by Belgian and foreign archive institutions. An estimated 10% of the seals upon which the moulds are based have been lost. Some 10% of the moulds are today in a better state of conservation than the original seals from which they are made.