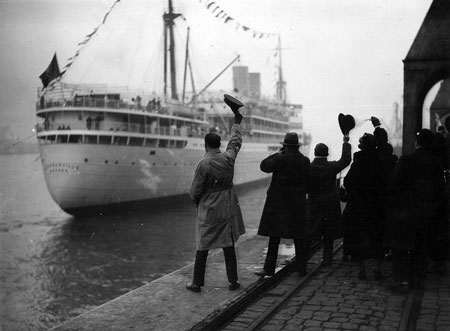 In the 19th and 20th century, a lot of information was systematically recorded in chronologically structured registers (minutes for example). In addition, jurisprudence and taxation led to the creation of particularly voluminous record series, in which documents were organised by topic (for example files of the foreigners’ police) Registers in particular were digitised, not only for their high research value, but also because they are access points to individual files.

The minutes of the Council of Ministers are a key source for research into the most diverse subjects such as the Royal Cuestion, the school dispute, the independence of Congo, the language border, etc. The original documents are bound per year and kept at the Chancellery of the Prime Minister. They account for a total of 60,000 pages. A dedicated search engine enables full-text keyword searches and filtering per period. Although the quality of the typewriting on carbon paper is not flawless, the full-text search provides many research possibilities.

In collaboration with the Chancellery of the Prime Minister.

The ‘Mouvement de la Population’ (in Dutch ‘Loop van de bevolking’) forms a unique series of 717 registers and 23,000 tables of population statistics from the period 1841-1976  collected down to the municipal level. In the nineteenth century, Belgium was a pioneer country in population statistics. Indeed, nowhere else in Europe such old, homogeneous and detailed population statistics are to be found. For all Belgian municipalities, this source provides data from the civil status registers (birth, marriage, death); population registers (arrival at and departure from the municipality, previous place of residence, destination); registers of stillborns; register of death causes (as from 1851 in the wake of the cholera epidemic of the 1840s); registers of departure (1866) and arrival (1900); foreigners registers (as from 1933).

In the course of the 19th century, increasing industrialisation and commercialisation led to more government regulation. In this context, the law of 1 April 1879 established a general framework for the registration of marks. Henceforth, marks had to be registered both at the local commercial court and the national administration before businesses could make exclusive use of marks.  Through registration, exclusive rights regarding the use of particular marks for offered goods and services were granted.

The bulk of the archives of the Trade and Industry property/Manufacturer’s and Trade Marks Service of the Ministry of the Economy mostly contains illustrated minutes of trade mark registrations. As iconographic documents - initially often in Art Nouveau or Art Deco style - trade mark registrations form a source of choice for the history of advertisement in particular and of mind-sets in general. The 36 chronologically ordered registers of manufacturer’s and trade marks (1879- 1970) that provide access to the minutes are entirely digitised.

In 1920, the debate between those in favour of ‘cinema’ and those who opposed it led to the Vandervelde law. Henceforth, the film industry could voluntarily submit films to a rating commission of the Ministry of Justice that would give one of the following ratings: children admitted (- 16 years), children not admitted, or children admitted provided that offending scenes are cut.

The archives of the Film Rating Commission gives deep insights into the manner in which violence/crime and sex/eroticism was perceived in the course of the twentieth century. When the commission began its work in 1922, its ratings were often very strict. In the following decades, appraisal of the influence of films on children became the centre of attention. In 1992, the final ‘cut’ was imposed. For over 70 years, cutting scenes in films had been considered as a normal practice. The series of minutes with the precise indication of the scenes to be cut (inventory nos. 85-121, 1921-1992) form a remarkable testimony of that time.

In the 1950s, INEAC/NILCO (1933-1962) developed into the flagship organisation of the colonial administration in Belgian Congo and Ruanda-Urundi. Unlike its predecessor, the Colony Plantations Administration (Régie des Plantations de la Colonie/Regie der Plantages van de Kolonie (REPCO), 1926-1933), this organisation was unequivocally of scientific nature. In addition to its research centre in Yangambi that earned international reputation, NILCO established research centres across the territory of Belgian Congo and Ruanda-Urundi, where various aspects of agriculture were studied. The independence of Congo in 1960 and of Ruanda-Urundi in 1962 brought a swift end to the expertise gathered thus far, which was at the service - according to the critics - of large-scale and export-oriented agriculture only.

The largest part of the archival fonds bears on the management and activities of the centres. The collections of photographs, glass negatives, maps and plans have all been digitised.